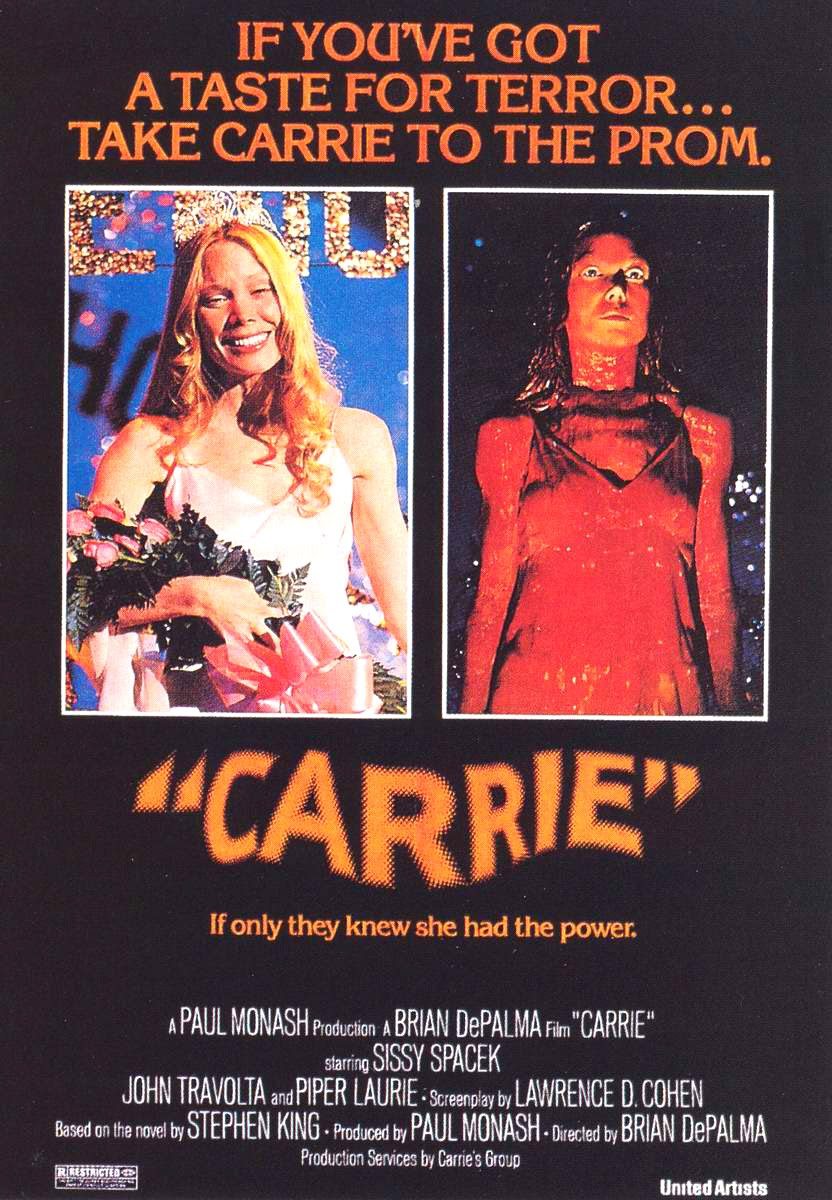 (based on the novel by Stephen King)

Carrie White is a pop culture horror icon that came from the mind of the widely acclaimed Stephen King. Growing up as a big King fan, I hold a special place for a large amount of his work and films adapted from his work. I have previously read Carrie before watching this film for this review. With a new look towards this film, It really doesn’t hold up as well as the book does. But, it still does the best it can and has some of the greatest performances and editing in horror film history.

Carrieta White (Sissy Spacek) is the poor, laughing stock of the school. Raised in a bible thumping household, Carrie knows nothing outside the bounds of what her mother (Piper Laurie) will allow. After a confrontation occurs in the girl’s locker room over the knowledge (or more lack there of) menstrual processes. Out of pity, a young girl asks her boyfriend (William Katt) to ask Carrie to prom. But, what people don’t know is that Carrie has a special power. A power to disrupt her environment without moving a muscle. Will this end in happiness or heartbreak?? Life or death?? Anybody who has seen the theatrical poster probably knows the answer.

I’ve always had a big problem with Carrie adaptions for the fact that they fail to cast Carrie correctly. Yes, Sissy Spacek is an amazing actress and kills (quite literally) as Carrie. But, Carrie is supposed to be the average chubby, underappreciated girl with zits you can find at any high school in the U.S., not the good looking actresses that always seem to be cast as Carrie. As a Stephen King adaption, Carrie is great as it stays pretty close to the book and has it’s own cinematic spin on the story. However, as a Brian De Palma film, it is definitely nowhere near his best work.

The chemistry between Sissy Spacek and Piper Laurie is dreadfully realistic. I find myself cringing in intensity throughout their entire sequences together. They both were nominated for Best Actress in a lead and supporting role. The film from beginning to end is very slow up until the notorious prom climax. There are a few scenes that keep you going, but more often then not, I found myself having trouble keeping my attention on the film due to it’s average teenage drama build with some extraordinary occurences.

Carrie is a must watch for horror/De Palma/Stephen King fans, no matter what though. Despite any flaws I found to pick out, this film is easily one of the best horror films adapted from King’s work, under Misery and The Shining. This film is very easy to find, and more likely than not, you’ve already seen this film. I personally don’t have the love for Carrie that I know many other people possess. Carrie has been praised to death, and for relatively good enough reason. A good watch that’s worth buying for your October season.