MPAA Rating: R for sexuality/nudity and some language.

Five Easy Pieces is another film from BBS, directed by Bob Rafelson (dir. Head) and starring Jack Nicholson (Easy Rider) now in the lead role as the Nicholson we know and love. On my BBS marathon, I’ve found Five Easy Pieces is easily my favorite film thus far as it is very personal and bitterly realistic. The situations littered throughout the film are incredibly uncomfortable and charming in an unsettling way. Five Easy Pieces shows an avante-garde story displaying the blue collar worker in the most blatant and unapologetic way.

Bobby Dupea (Jack Nicholson), a former piano prodigy, is the perfect definition of a narcissist. He moves from place to place and makes ends meet where he can while doing everything in his power to lower the self-esteem of his girlfriend Rayette (Karen Black). After a long string of temper tantrums, unfaithfulness, and long nights out, Bobby loses his job and visits his sister at her recording studio. Upon learning of his estranged father’s illness that has pushed him close to death, Bobby takes a trip up the country to make amends with his past with Rayette following close behind. 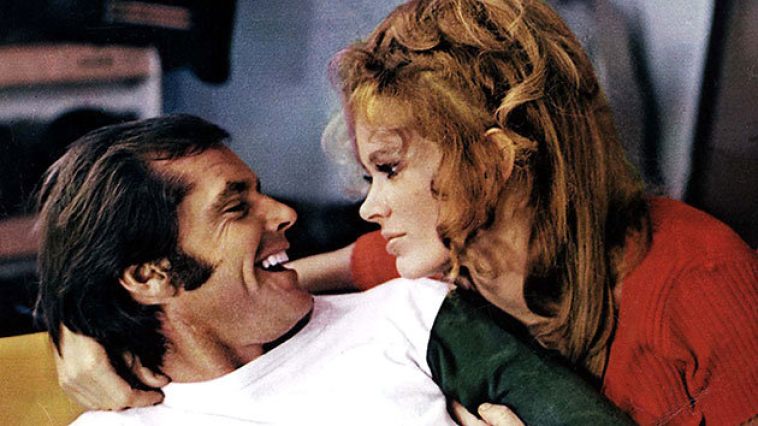 This whole film is driven by the brilliant performance of Jack Nicholson as he takes his destructive path across the country. He plays Bobby with a rebellious attitude that is a staple Jack Nicholson role that he plays many times throughout his career. There is a lot of fun to be had here as you see Nicholson go on his unpredictable rampages and even at the subtlest moments spit out insults and degrade anybody who crosses his path. His sincere disrespect for other people is what makes Five Easy Pieces so believable and is one of the main reasons this is my favorite BBS film so far.

The soundtrack adds an atmosphere to the film that benefits the ideas and general mood of the film as a whole. The two types of music you’ll find in this is female sung country songs (which I usually wouldn’t be too keen of but it definitely works in this case) and classical piano music which both enhance these scenes substantially. Karen Black also does a great job combating Nicholson and plays the unintelligent blonde who will lower her standards just to make her boyfriend satisfied.

“I move around a lot because things tend to get bad when I stay. And I’m looking… for auspicious beginnings.” Even with the many unlikable traits of the supreme asshole anti-hero, you can’t help yourself but love the charm that is given off by Nicholson. The cinematography from the very first shot to the final shot, that is held on to for an extended period of time, really just put you in the shoes of the protagonist and does an amazing job at making you feel his alienation and the constant need to make a living somewhere. The deep orange sunsets and dull blue ocean as well as many other beautiful vignettes make the film really visually stunning.

Overall, Five Easy Pieces is a must see film if you wanna see pre-One Flew Over The Cuckoo’s Nest Jack Nicholson flaunting his true ability to perform. A staple in rebellious cinema and one of the most interesting films that I’ve ever seen. The complexity of the characters, especially Nicholson’s Bobby Dupea, make you fall in love with every piece of this film in it’s own way. Definitely get your hands on this and give it a watch, if you haven’t!